The Fourth and final Scripting webinar went well! The next webinar on March 10 will be about how to generate original story ideas using the clustering technique, which attendees learned to use as part of the opening scripting exercise, The Word Of The Day. I’ll be reprising the techniques, so newbies are invited to join!Here’s the Word Of The Day exercise plus the new techniques and my examples of the complete morning exercise.

1. Upon waking, select a word or phrase that “pops” into your head.
2. Grab a paper and pen. Write the word in the center of the page and circle it.
3. Set a timer for a minute, and free associate by writing the word, words or phrase, circling it and attaching it to the central circle. 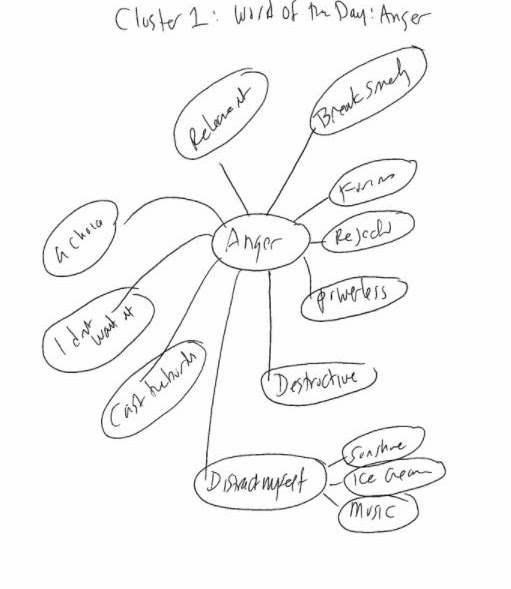 4. When the timer goes off, set it again.
5. Choosing either the last word or the most interesting word, create another cluster.
6. Take that word, put in the center of a new page and circle it.
7. Set a timer for a minute, and free associate by writing the word, words or phrase, circling it and attaching it to the central circle. 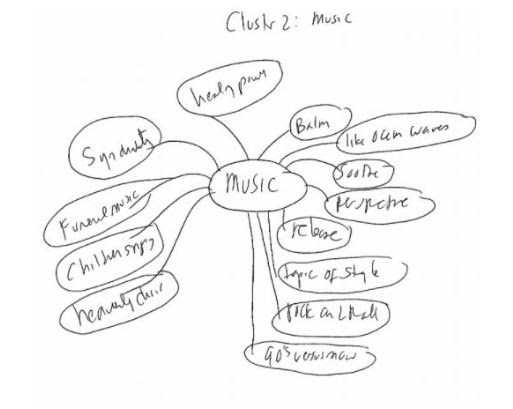 8. Take a fresh page and put the two words separated by a slash in the center and circle it. (In my example, the two words are Anger/Synchronicity).
9. Set a timer for five minutes, and free associate by writing the word, words or phrase, circling it and attaching it to the central circle. 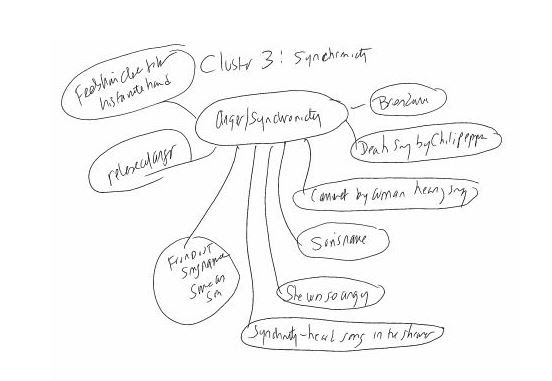 10. When the timer goes off, take a fresh page and see if you can write a four line story idea with a beginning, middle and end.

The upcoming webinar on March 10,  will delve into steps 8-10 in more depth.

And here’s the final story I came up with:

When Sally, Brendan‘s mom found out that her 19-year-old son had died in a motorcycle accident she was filled with rage, and blamed his best friend, Jack, for encouraging her son to ride motorcycles in the first place. Jack was badly injured, but had survived.

Jack had been living with them since he’d had a fight with his dad that had come to blows. When Sally came home from the hospital, all she could think about was how  to get rid of Jack.

Sally took a shower. While she was in there, the radio began to play a new song by the Red Hot Chili Peppers, her late son’s favorite band. She got out of the shower to find out what the name of it was, and to her amazement, the name of the song was: Brendan‘s Death Song. Her late son’s name was Brendan. She felt her son’s presence, and great tears of grief flowed freely, melting her anger at Jack.

Now Sally and Jack were freed to grieve together and build a new life. Such is the power of music.

This story is not complete in itself, but is the raw material for a poem, longer story, or even a book or screenplay.

The whole process took me less than a half hour, and now I have something that didn’t exist a half hour ago:  a rich story idea that excites me because it raises questions that need answers, such as where’s Brendan’s Dad? Why is the friend living with them? Why is a 19-year old kid riding motorcycles in a dangerous situation? What does the mother do for work? Is her real name Sara with or without an “h” on the end? What made her post on the YouTube site of the song? Why is there another similar comment by a father further down on the list? What if they met and fell in love as the result of “meeting” on the site? What if? What if?

As you see this clustering technique is loaded with the potential to free you to release original ideas that you weren’t even aware of. Do this daily, and you can create a library full of ideas that you can mine for commercially viable material.

I’m so excited to share Jokeonastick Episode #61. Laughter is the best medicine! 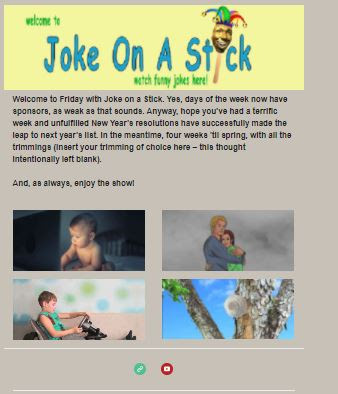