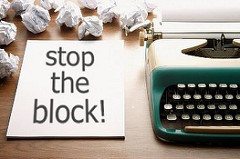 As a consultant, I help screenwriters—as well as fiction, non-fiction, spiritual, and self-help writers—create and develop commercially viable projects. The seemingly simple first step is to get something down on paper, but this can be a moment of intense fear: facing the blank page. When I was a beginning writer, I used to suffer this terror daily. Then one day, as I sat down to write, an actor friend called and changed my life forever.

I asked her, “What do actors do to prepare? How do you start? How do you get fired up so you can jump into a scene when you’re rehearsing?”

“I have a trick,” she said. “I remember that no matter where a scene starts, there is always something that came before it.”

“Does the event that you imagine that proceeds the actual written scene have to be relevant to the specific play or film?”

“No, very often I will take a recent event in my own life and ask myself what my character would do in the same situation. “

After we hung up, I set a timer and wrote for ten minutes about what I had been doing right before the writer’s block set in, which in this case was having breakfast. I felt a clear shift, and suddenly I was able to complete the scene I was writing in record time.

This led to an epiphany. And it cured my writer’s block. I realized that the question I needed to ask myself when feeling blocked is “What was going on just before I started feeling this way?” This question is not intended to be deep or psychological but literal. Not “I was depressed about the prospect for world peace” but “I ate a large bowl of oatmeal with raisins and milk.” On the day when I spoke with my friend, I had in fact just eaten a large bowl of oatmeal, and the ten minutes spent writing about the experience relaxed me and allowed me to work on the scene with ease.

I experimented with this “moment before” idea and tried it when feeling blocked as well as using it as a general warm-up. I even consistently found a direct correlation between warming up and the need for less rewriting. My writing improved rapidly. I still do it to this day.

When I shared this technique with my private clients, almost all found it helpful. Some tweaked it so that they wrote about their feelings of fear as opposed to a physical event like breakfast.

I also began to teach it in my classes at New York University. I suggested that my students warm up by writing for five minutes about what had happened to them on the way to class. I encouraged them to recount mundane events and even to complain. When we read the results aloud, the class erupted in laughter and tears—and bonded. Best of all, the work began to flow.

The next time I saw my friend, I bought her lunch.

“What’s that for?” she asked. “It’s not my birthday or anything.”

“For helping me get my project done!”

To recap: To combat writer’s block, just start writing—about what happened in your life right before you sat down to work, or about your feelings of fear. You may also find that your work needs less rewriting later.