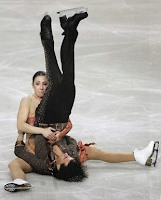 To understand the difference between drama and comedy, go to YouTube and watch Don Jackson 1962 Prague and then watch the so-called worst figure skating routine in historyby skater Mark Leung.

Both are great skaters. Jackson is a Canadian who won the world championship in 1962, in part because he was the first man to land a triple lutz in competition. He then made a career for himself marketing his own success.

The drama in the Don Jackson videos come from the tension of the audience’s concern about his winning or losing while the comedy in the second video comes from Leung clowning around as he skates just for fun, trying to entertain the audience. Both are great skaters, but each has a different, ahem, spin.

As you work on screenplays, try to define the type of story you’re telling, and try to tell stories about people who become a virtuoso in their field, however grand, like Don Jackson, or humble like the team in No Reservations who open their own restaurant.