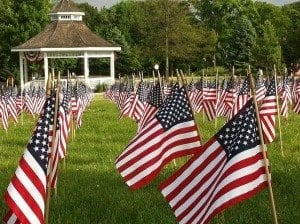 I really miss my late stepfather, Al, on this holiday. Al was a former special services intelligence agent who came into my life when I was 14. He became the loving, hands-on father I hadn’t had.

Al was a different kind of guy than anyone I had ever known. He grew up on a cattle ranch in Montana, where his grandfather was also the local sheriff. His parents ran a speakeasy in Chicago. By the time he met my mother he’d also served in all kinds of murky espionage jobs. He was a wiry man with a barrel chest and big arms who was the spitting image of the actor, William Holden. He’d run away at 14 to join the Marines, successfully lying about his age, and spent the last years of the war in Iwo Jima.

By the time he met my mother he’d retired from the service and worked for a company that made ultrasonic dental equipment. He liked to drink, and because my mother was teaching nights, I would often accompany Al out. Gleason’s, a local bar on Manhattan’s Upper West Side, was his favorite haunt.

One day when I came home from school, Al took me for a burger at the bar. I was about 16.

It was about five o’clock, and the nightly Happy Hour was going full blast. By seven, the place had thinned out. Gary, the owner’s nephew, was on duty. He was a short Greek guy with glasses, a soft voice, and as he was a timid soul, he could barely make eye contact when he served. He studied philosophy at Long Island University.

Al was always trying to get Gary to take some martial arts class so that Gary could “grow some balls.” After a few drinks, Al called Gary over and started in on him about classes. I rolled my eyes at Gary in sympathy.

Just as Al was about to make one more plea, three obviously toasted guys, wearing Texas U T-shirts and cowboy hats, rolled in. The shortest was over six feet and built like the side of a barn. The tallest was at least six and a half feet. They settled onto three barstools, ordered beers, and shots, and began to argue amongst themselves.

“Could you tell them to keep it down?” Marge, a middle-aged attorney with bright blond hair asked Gary, looking up from her legal brief. He looked terrified, but went to do as he was asked. One of the three big guys listened with mock seriousness as Gary stuttered, “Could you please keep it down?” The guy nodded and gestured for another round. Peace was restored for ten minutes until the three men got into a heated argument.

They were clearly drunk, and their tone became strident. When Gary approached to ask for quiet, the biggest guy shot him an evil look and the bird. The men resumed their argument, and their voices grew louder by the second. One man leaned forward, and I could see the butt of a gun sticking out above the belt of his jeans.

Al watched all of this impassively. But when one of the cowboys shoved another, Al was already standing by the time Gary rushed over to us and said, “Can you help me, Al?”

Al’s eyes narrowed, and he nodded. He walked over to the guys and said something in a low voice. The smallest guy shoved Al, who caught and twisted the offending man’s wrist and immobilized his hand. Al leaned in and whispered something. A moment of silence followed, and my heart stopped as I saw the baddie reach for the gun. Al spoke again. There was a long pause.

Suddenly, the cowboys calmed down and a hundred dollar bill appeared on the bar. The three men turned and slunk out of the building.

Peace was restored. Al came back to his seat. “Ready for some dessert?” he asked. I nodded yes. Gary rushed over and said, “Thank you. Drinks are on me.”

As Al nursed a triple Johnnie Walker Red, and I nibbled key lime pie, I asked Al what he’d said to the rowdy barflies. He laughed and lit a cigarette.

“Did you notice that the biggest knucklehead had a tattoo on his forearm?” he asked.

I shook my head.

“Well, it’s a Marine tattoo,” Al said, as if that explained everything.

Al gave me a look that I’d never seen before. His normally gray-blue eyes suddenly turned the color of steel and twinkled dangerously. The lines of his usually smiling face had hardened so that it looked as if it had been chiseled out of stone. Suddenly, I was afraid.

I felt a cold tickle along my spine.

“I guess so. But you were kidding, right?”

“Kidding? No, I wasn’t and they knew it. So, grasshopper, the moral of this story is that if you don’t fear death, you’re going to win. If you do, you will always act out of fear.”

“No, it depends on how close you have been to it. Didn’t you almost die from smallpox when you were little?”

“Do you fear death?”

I’d never thought about it before. I checked my feelings and was surprised. “No, I am afraid of being hurt, but not of dying.”

He smiled approvingly, reached over, and hugged me. “How’s your pie?”

Did I mention that Al served in 5 wars and received several Purple Hearts?  As a result of being in that bar, I always ask myself what I am willing to “die for,” when I am writing. I incorporated this very question into one of my books, The Four Magic Questions of Screenwriting  to help writers determine the second part of the second act.