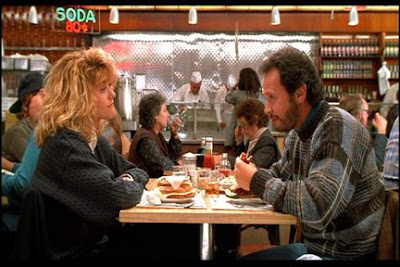 Take the scene you want to tweak, and add an event that happens just before the opening you have written.

You are now going to write a mini-scene before your problem scene begins. This will help you find the subtext of your scene, and then improve it.

Consider the diner scene from When Harry Met Sally and then we’ll add something to the opening.

A quick summary of the scene: Harry and Sally stop at a diner. As they walk towards the entrance Harry accuses Sally of not ever having had good sex. They enter, and everyone hears her protest, “It just so happens that I have had plenty of good sex.”

Once seated, Harry demands to know who this great partner was. When she reveals it was Sheldon Gordon, Harry lashes out and insults him by saying that his name, while perfect for a dentist, is a sex joke: “ride me, big Sheldon.” His tirade is interrupted by the waitress who arrives to take their order. Harry orders the special, and Sally places an order of such intricacy that the waitress and Harry are stunned.

Harry wants to know why Sally and Sheldon broke up. Sally reveals that it was because of her Days of the Week underpants — Sheldon wanted to know where the set for Sunday was, and when she explained that didn’t make them because of God, he broke up with her.

Now, let’s change the scene by adding a new opening: before Harry and Sally enter the diner, they see a man and a woman engage in a passionate embrace in the parking lot. By literally showing the subtext, the two people being sexual, it pushes the unspoken question — Will Harry get Sally into bed? You can imagine how loaded the conversation at the table becomes because of what they had both just seen.

To know what kind of event to select, consider the subtext in the scene. What is your scene really about? Just answering this question may give you the information you needed to fix the scene in the first place.

For example, if your scene concerned two criminals discussing the possible outcome of a heist, then having both men witness a criminal being caught before the scene begins would be a good choice. Go with the first thing you think of –you can trust that your intuition will always help you pick the right event.