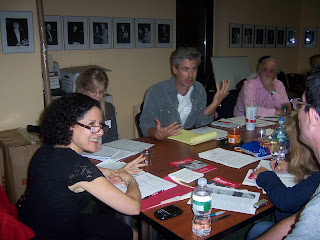 I recently presented my Creative Business of Screenwriting workshop at NYWIFT (New York Women In Film And TV).

Before the workshop began, I was introduced to the eleven-year-old son of the Program Coordinator.

“Tell Marilyn what you want to write about.” she said to her son.

The boy was bashful, hung his head. But as soon as his mother walked out of earshot, he said, “I do want to write. But what can I write about, I’m only eleven?”

I thought about that and then said, “You have to write from wherever you are, which is perfect. Everyone either was once eleven, or is eleven. Great writing begins by getting your reader to identify with the character you’re writing about. If you can give us the experience of how being eleven feels to you, then you can expand and write about the war, politics, anything that appeals to you.”

I gave him a copy of my book How To Write A Screenplay Using the Horowitz System™ – The Middle School Edition and later, as I taught I noticed the young man in the room, smiling broadly.

Afterwards, I went back to say goodbye to him and his mother. I hugged her and then turned to her son.

“So what do you do these day? Daps? Pounds?” He gave me the sweetest smile and said, “ I do hugs,” He gave me a giant hug and whispered,“ I know now that I can write.”

In the seminar, several people had said something similar to this boy — that they didn’t feel that they had anything to write about. I know that everyone who wants to write has something to say, and that the best way to get started is to write about wherever you are right now.

The “Being You” Exercise:
For 15 minutes using a timer, write about what it feels like to be you, describing your hopes and fears. You will find this exercise helps clear your mind before writing, but also helps you get to know your characters better too.