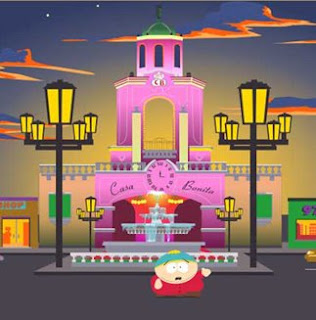 When my assistant was in Denver, he visited a Mexican restaurant/attraction called Casa Bonita. He went solely because it was featured prominently in an episode of the television show South Park, where Cartman tries to worm his way into a birthday celebration.

When I saw my assistant’s short film (below) it made me think about how much I admire Trey Parker, the creator of South Park, because he embodies a basic philosophy that I refer to constantly in my class and books, which is fly the plane while you’re building it or, in my lingo: “Don’t Get It Right – Get It Written.”

Unlike other animated programs, like The Simpsons or Family Guy, which are produced 6 to 8 months in advance, the episodes of South Park are regularly created only a few days before they air.

Trey is a man who doesn’t take “no” for an answer. His first live feature, which was about cannibalism in America (certainly a hard sell), was shot on a wing and a prayer. They shot the trailer and used that to raise the money. What made this even more amazing: It was a musical!

My assistant was inspired to make a film about Casa Bonita when he saw the same divers that were featured in the episode of South Park. But instead of worrying about help with the production, he simply pulled out the company flip camera, shot it and posted it online. As a result, we now have, for better or worse, a short film about cliff diving in a Mexican restaurant.

What’s stopping you from doing the same thing with your own subject matter?