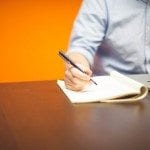 What do you do when your screenplay is not as compelling as you had hoped, but you know somehow the story is “in there?” Here is a 3-step technique that can help.

First, go back and write your story as a one-page synopsis, laying out your plot from beginning to end, regardless of how it has been written. No matter what level a writer is at, I almost always recommend that he or she work this way even when first creating a story because it’s easier to change something when it has been developed properly. If you build the right foundation, it’s a lot more likely that the “house” of your story will be well built.

Completing the first part of the exercise will help you determine whether the story is strong enough because even if it’s already written in the traditional order, compressing the plot into a short description exposes the plot so that you will be able to look at it objectively, separate from the words on the written page. Ask yourself if you would actually pay to see your own movie.

The second and third parts of the exercise are to temporarily restructure your script and either put the end of the story at the beginning, or to retell it backwards. Since many scripts are just not interesting enough or have too much boring “backstory” the audience would have to understand before enjoying the film, changing the order in which the story is presented can solve these problems.

A good way to perform this exercise is to split your third act into two parts and use the first part of Act 3 as either a prologue to, or as a new Act 1. You would then pick up where you left off after the end of Act 2.

For example, Christopher Nolan’s latest picture, Inception, uses this technique. By using the first scene from Act 3 as a prologue to “frame” the action of Acts 1 and 2. It creates a strong point of reference so that the audience can relax and enjoy the sometimes-confusing dream within a dream structure. In another example, the movie, Pulp Fiction, uses this technique for a different purpose, that is, to create a sense of unity in what is really a series of episodes strung together.

If you decide to try telling your story backwards, the film Memento, is a good example to follow. The movie tells the story of a man who is trying to 1) remember his own identity and 2) find out who murdered his wife. Telling the story backwards makes this ordinary plot feel fresh and makes it possible for the clever device of having Leonard, the hero, trying to decipher the clues through the tattoos on his body.

Here’s how to do the exercise:

Write the story of your screenplay from beginning to end. Try to write only one paragraph for each thirty-minute/page chunk.

Use either the story told backwards technique or split your third act in half, using the first half as the beginning of your story, and leave the rest where it is.

Write a new one-page synopsis describing the action of your screenplay with this structural change. Whether or not you incorporate the changes into your screenplay, this exercise will give you new insights and help you improve your story.