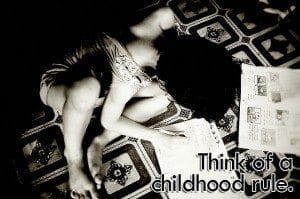 Childhood experiences helped to shape the character of Sarah in my new novel, The Book of Zev. Here are some thoughts and a script tip that apply to any storywriting – how you can use a childhood lesson to enhance the depth of your character.

This week, a friend of mine told me a story about a memory she had of a friend of her mother’s who had passed away recently. My friend recalled when she was in her early 20s, she needed a dress for a special occasion and “Aunt Nancy” took her to Neiman Marcus to buy one. At Neiman Marcus, Aunt Nancy was treated like royalty, not because Aunt Nancy was a big spender, but because she treated everyone from the janitor to the CEO “like the president” – with dignity and respect.

After trying on several outfits, my friend came out in an attractive black dress, to which Aunt Nancy replied, “That’s lovely dear, but we don’t wear black until we’re twenty-five.” This fashion rule stuck with my friend to the extent that she passed it on to her own daughters, even though this fashion rule is no longer followed today.

The lessons my character learned were: 1) treat everyone well; 2) Nancy was an unconventional person who used conventions to her advantage, Sarah does often in the book. Thirdly, our mentors help us choose the best way to live and behave.

Here’s a script tip on how to use a childhood lesson to enhance your characters:

2. Think of a childhood rule that stuck with you, such as “We don’t wear black until we’re 25” or “Don’t speak until spoken to.”

3. Decide if your character is a rule follower or rule breaker. How would she or he react when confronted with this rule. Would she still insist the rule is relevant and necessary? Or is it passé or no longer applicable.

4. Write a scene describing how your character reacts to such a rule.

5. Now do the same for your villain