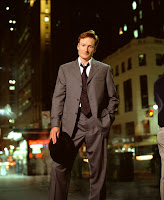 Other than kissing the occasional dolphin and joining Twitter, we hadn’t seen nor heard from Conan O’Brien since he taped his final Tonight until word broke this week that Conan might be taking his show on the road.

The late-night host, whose $33 million NBC payoff deal signed a month ago includes a clause forbidding him to appear on TV until Sept. 1, is eager to keep his name in lights, sources tell us. One insider said, “There’s nothing to stop him doing his show in front of an audience at venues like Radio City. It will build more buzz for him as he negotiates his next television contract. It will also keep Conan happy because he doesn’t want to be out of the public consciousness for too long.

Which TV show or film would you like to see adapted for the stage?