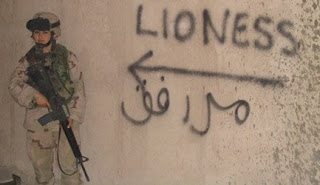 I have already purchased my tickets for the Tribeca Film Festival screening of Lioness.

Information about the film is provided below, including how to buy tickets.

I look forward to seeing you all there.

Lioness, the provocative and powerful new documentary from Meg McLagan and Daria Sommers tells the story of five women who served together for a year in Iraq. These women made up the core of the group dubbed “Team Lioness” by their commanders. Due to the complexities of winning the hearts and minds of the Iraqi people during this controversial war, some of the women in the US military were used to help defuse the tensions with local civilians. The unintended consequence of this maneuver was that they often found themselves fighting some of the most horrific counterinsurgency battles of the war. Through intimate moments with the women who made up Team Lioness, we get their deeply personal stories of how this experience affected them on the battlefield and what the cost of that deployment has been as they work to rebuild their lives back home. With startling footage and firsthand reports from the streets of Iraq, we get incredible access into the anatomy of a firefight. Hailing from vastly different backgrounds around the country, the women of Lioness give us extraordinary access into each of their lives and a rare glimpse at the essential role that women are playing on the ground in Iraq.