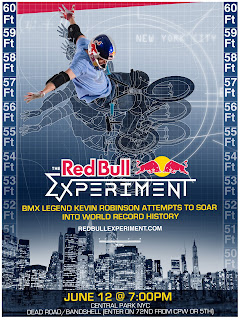 Today, I had a meeting at 11:00. My clients arrived carrying open cans of Red Bull and in a jubilant mood. I looked out of my office window, and 71street was filled with red bull mobiles being driven by sexy blond women handing out samples. Considering that two weeks ago the entire street had been torn up for repairs, and was unusable, this plethora of advertising seemed a bit bizarre, but fun. The function of this “mobilization” was to promote a free event to attract people to witness the “Red Bull Experiment,” a world history making BMX Bicycle jump by a fellow named Kevin Robinson. He will be attempting to leap as high as a six-storey building by riding down a gigantic ramp. I hope he makes it.

What struck was the assumption of success, and the pressure this guy must be feeling. It wasn’t just that he has to win for himself, but for all of his corporate sponsors, his friends, loved ones and of course, parents.