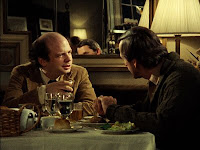 In my private class last night, I discussed dialogue, which should either advance the action or reveal character.

One great way to know if dialogue is needed is to ask yourself if the information could be conveyed any other way. The scene in question was one in which two very wealthy middle-aged men are having dinner and discussing how to merge their two giant companies. If you can imagine this as a scene in a film, as they spoke, you could see they were plotting together, and understand what type of deal they were negotiating. Without dialogue we could not understand the specifics of the business they were discussing. Clearly,in this case, dialogue is called for.

Here’s a tip: Since this will be fairly dry dialogue, the best way to write it will be to have them argue about some aspect which will distract the audience and not make them feel they are being force fed information.