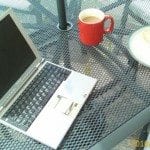 What does diet have to do with writing? Everything! In my work as a coach over the last fifteen years, I have found that the best way to accomplish difficult tasks is to find a methodical way of proceeding. I have written several books that disseminate my trademarked method of screenwriting, The Horowitz System® including The Four Magic Questions of Screenwriting, which explains the art of structuring a screenplay fast. The method concerns the creation of a good story using the three-act structure as defined by Aristotle.  It explains the ideal proportions for each act and the secret order you should follow as you create.
As a writing coach, I quickly discovered that a methodical approach to writing was not enough to guarantee success, because as John Lennon observed, “Life is what happens while you are busy making other plans.” So often the other aspects of a writer’s life interfere and, sometimes, even prevent the successful execution of a script, and one of the most common problems we encounter is the struggle to maintain our weight and health. As with writing, a methodical approach to diet helps support good health and, by extension, good writing.

I have had many students who have really struggled with their weight outside of the realm of our work, and when they become writers, the problem is exacerbated because of the stress involved in creation. Also, when we write, we empty ourselves and crave fullness in whatever way we can find it, and if overeating is a habit, writing often makes it worse.

In the film Adaptation, we see the main character avoid facing his work by fantasizing about eating a muffin. We laugh, but not solely from amusement. How many times have we sat in front of our computers eating as a way of coping with the impossible demands writing requires? I know that for myself, this is a constant challenge. As soon as I sit down to work, I almost always instantly decide that I am ravenous and must eat everything in my fridge! I overcome this urge by always keeping some cut up celery and carrots at the ready. As soon as I begin crunching, I become aware that I am panicking. Usually this realization, plus a few deep breaths, helps me become calm and focus on the task at hand.

But if this step doesn’t curb the desire to eat, I turn to my own method (sometimes adding a small prayer – which never hurts.)

The creation of my method was an attempt to help both my students and myself.  It took a bit of doing, but the simplicity of the solution was astonishing, and was naturally methodical.  I based my method on the theory of food combinations. I make no claim to being a medical authority, but my students have reported excellent results. There is more to this method, of course, but for the sake of this article, I will discuss only the core principle.

There has been a lot of controversy attached to the concept of food combining, a theory that suggests that we can be healthier (and thinner) by eating only certain foods at the same time.  While the proponents of food combining do not always agree on the time and/or the foods that should be combined, I found that by asking my students to make one simple choice, they can take control of their overeating challenges.

The diet is not specific about the foods but rather the food groups, of which, there are four: protein, starch, fruit and vegetables, and fats.

When I work with a student who is having a writing-related eating problem, it’s usually one of two things: snacking while writing or eating too much of a favorite food.  My method solves both problems.  For example, one of my students loves pizza and had put on about ten pounds while working on a new script, so she decided to apply the food-combining technique.  I asked her which part she liked the best.  The answer was surprising: She said she loved the first bite.  So she tried a first bite of just the cheese, and then a bite of just the crust.  The cheese won out, so she committed to eating the cheesy part and leaving the crust. No surprise that she quickly lost weight, even though she was eating pizza too much and too often.  Obviously, not eating the crust helped her regardless of whether or not she was consciously food combining, but as she made the choice with more and more of her foods, she realized that her concentration got better and she was getting more writing done.

Overeating while writing can also be controlled through making food-combining choices.  Remember, food limitation is the secret to weight control. Also, if you are a writer who “grazes,” the key is to organize healthy snacks before you sit down for a writing session using these food-combining choices as the organizing principle.

For example, if you decided that your writing session would include starch snacks only, you might choose chips, nuts, cookies, or bread, but would exclude any dairy (which is protein), including ice cream or milk.  The limitation of cookies (starch) but no milk (protein) causes a natural calorie reduction that keeps you from getting chubby. If you went for protein snacks, you might include yogurt, sliced deli meat or cheese, but would exclude crackers or bread. Fresh fruits and vegetables are always a great snack, regardless of whether you’re choosing starch or protein.

Just as my Four Magic Questions of Screenwriting can help your writing, there are magic questions to help your eating while writing.