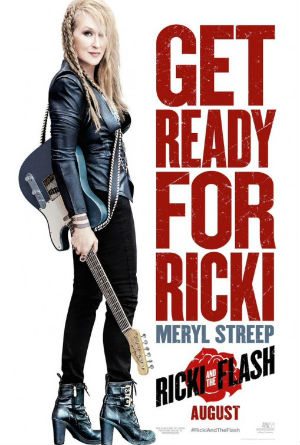 I have been working away on my new book, and frequently find myself deep in “the woods” of the story, unable to see the “forest” or overall thematic view of the piece. I got lucky this weekend when I saw the new film, Ricki and the Flash. Films have always helped me define myself though the process of identifying with the main character, and comparing their choices with my own. The blessings and curses of free will are what I am interested in exploring in my work, and Ricki and the Flash explores this topic in an interesting and unique way. I also like stories that offer a message of hope. This film has a “feel good “plot, yet manages to convey a level of moral complexity.

The plot is simple: Ricki Randazzo, a woman who left her husband and three children many years ago to follow her dream of becoming a Rock and Roll singer learns that her grown-up daughter is distraught after being left by her husband. Until the phone call, Ricki’s content with her life as a supermarket checkout clerk by day and Rock and Roll diva by night.

She returns to her family only to find her daughter in a deep depression, which Ricki’s ex-husband is at his wits’ end to fix. In short order, she has helped her daughter, and made peace with her ex. After an awkward dinner with her two sons, and the new wife, Ricki leaves after finding out that one of her sons is now gay, and the other’s getting married and she’s not invited to the wedding. The turning point in the film is when she receives an invite from the wife to the son’s wedding, and she decides to attend.

The world Ricki left is a moneyed suburban world in which creativity seems to have no place. But Ricki’s made her choice and can live with it. Her character is not introspective and the only sign of any remorse is her unwillingness to let herself have a relationship with Greg, the lead guitarist in her band. While her leaving the family was initially damaging, the second wife stepped in and really created a new structure for the kids, who now call her “Mom. “

I really identified with Ricki, so her story challenged me to really question some of the choices in my own life as well as some of the choices my new character makes in the current story I am revising. This was the perspective I had temporarily lost as I was rewriting.

As much as watching the film helped me with the new story, Ricki and the Flash also set me thinking about myself, which is what any good story should do. It should provoke and inspire us to ask ourselves what we would have done in a similar situation? I wondered if I would I have given up or put off my dream to raise the kids? Or could I have left to pursue the life I knew I wanted? While it’s never made clear in the film how young the kids were when Ricki left, it has clearly been a long while.

I wondered what prompted her to leave. This wasn’t explained nor was why leaving had to be an exclusive choice. Why couldn’t she pursue her dream and raise the kids? Why couldn’t the ex who was in Finance have moved with her to LA and helped her? Knowing more about what happened would have made the film richer, but since there was no information, I was left to fill in my own version of the back-story. In my version, the marriage was becoming unglued for other reasons, and her desire to pursue her musical career was the final problem, and a reason to part without digging into the root causes of the intrapersonal situation.  This is where I, as a writer, would have tried to dig deeper, and this is also where I ran smack into my own limited values. While I never wanted to become a parent, if I had been so unlucky as to have children, I would never have been able to leave them for a personal dream, because of my sense of duty. So I would have stayed and been miserable and probably made everyone around me miserable, too. I quite admired the difficult choice Ricki made, especially since its clear how much she loves her children.

In the case of the character in my new story, she has made a similar choice to the one Ricki made, and must live with the consequences. It was a weird moment when I realized that I did not approve of my character’s morality! I always tell my students to find a way not to judge their characters, and here I was doing that very thing!!!

Recognizing the pitfalls of judging your characters, I asked myself, “How can I find a way to be neutral about the heroine of my new story without changing her and the story?” In order to not judge my character I set about reviewing my version of the back-story for Ricki and the Flash, I concluded that it was better that Ricki left. If she’d remained, her unhappiness would have destroyed the family in another way, so perhaps she made a noble sacrifice, not committed a selfish act of abandonment.  When I applied that same reasoning to my character, I felt better. I concluded that both Ricki and my new character had made the best choices for everyone involved in each of the stories. I hope my readers will feel that way too when my new novel is complete.

You can learn more about Ricki and the Flash here