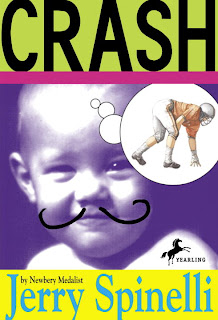 It’s been a while since I read a book that isn’t non-fiction, but I woke up out of a dream and couldn’t relax. I usually read something by Truman Capote when I read fiction, so I planned to reread “Breakfast at Tiffany’s”, but ended up reading a book called, “Crash” by Jerry Spinelli.

It’s a Young Adult story about a brutish jock who ends up befriending a nerdy Quaker boy who beats him in a race. The story begins with Crash being a bully, but in the end, he lets the Quaker boy win. I was moved to tears by that moment in the book, but mostly I really loved the voice delivered up by this excellent writer who managed to write from inside the head of this boy.

The message in the book is clear: doing the right thing is it’s own reward. I wondered where is the equivalent book for adults? How does a story about values for teens get replaced by some parable about how to cope with being fired or a novel about war, murder, and death? The news is full of the misdeeds and failures of other people, as is most of our so-called entertainment. At what point does learning how to behave ethically get taken off the table and replaced with encouragement to wallow in our own moral excrement?

I have no answers, but since this is a blog, I believe that I am allowed to merely express a 4:00am opinion:

It seems so hypocritical to tell teens how to behave considering the way so many adults act.

What do you think?