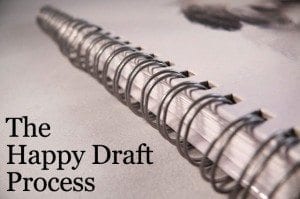 In my private rewriting class this week, my students completed the first part of the revision process that I call with no small irony, “The Happy Draft” process. This technique that allows the writer to assess what he or she has written in a positive way. Instead of the “kill your darlings” approach to revising, “The Happy Draft” method helps the writer keep what’s good. They can then use the holes made in the story by the removal of the less than great writing as opportunities to create new material.

The benefit of “The Happy Draft” process is that by  focusing on the positive instead of the negative, the process can allow for the writer gain a news burst of energy for the story.

One of the students asked me where I got the idea for how to work this way.

She was surprised and didn’t see the connection. I pointed out that when we make a choice in love, we will bend over backwards, put our heads in the sand and literally twist ourselves until all common sense is gone, as well as the ability to reason.

We’ve all done and seen it. Been in a relationship with the wrong person for too long. We stay involved with the wrong lover, or spouse, we keep friends who have become toxic, we even keep shoes that don’t fit because we bought them, even if we cannot get them on our feet.

As a side note, I read in The Week, that Kim Kardashian had toe liposuction to fit into the stilettos she wore at her wedding. Why not just have the designer create a special shoe for her? Or buy another style? Talk about defending wrong choices!

Why do we all do that? Many reasons, but one underlying factor is that we don’t want to be wrong.  We fight to be right, often at the expense of being happy.

Certainly that’s true of all of us writers who have struggled so hard with every scene we have written. Letting go of our hard-earned  work, is difficult, but “The Happy Draft” method allows us to  not to condemn those pages, but rather to make a determination in terms of the total story, and to hold the stuff that doesn’t fit for another time.

For example, one of my novelists who is writing a savvy thriller wrote several romantic scenes that were well-written, but had nothing to do with the main story – in fact they took the work in the wrong direction and stopped the tension cold. Because she’d assessed the book using “The Happy Draft” method, she was able to lift out these scenes and put them in a new file for her next book. What remained was entirely focused on the matter at hand, the resolution of the mystery. As a side note, we were later able to reintroduce some of those scenes later in the book when the rewrite was done.

To recap, by not fighting to hold on to your bad decisions, you open the doorway for something new and better to happen.

Here’s to your successful and happy writing,