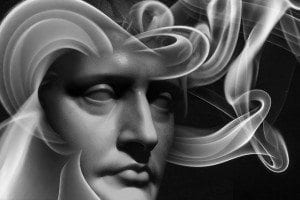 My friend W. called me up and asked if I would perform a tango with him at the seventy-fifth birthday party for his friend John, who was dying of some awful form of cancer. Doctors had told John he had six months to live . . . ten months ago. John had beat the odds by staying on this earth a little longer, but the doctors were right about one thing: The cancer would kill him.

Dancing the tango was the least I could do for a dying man. I told W. I’d be at the party, dancing shoes and all.

The big event was a wake held while the corpse was still alive. It took place on Manhattan’s East Side in a classic Irish bar marked by dark wood walls, a long polished bar, red-checked tablecloths, and waiters with thick Irish brogues. Guinness and Jameson flowed from the taps.

W. introduced me to John, who smiled warmly and said, “You are part of the family, since W. is like a brother.”

I learned that John had once been a tall, strapping man who’d coached high school football and as an avocation had devoted himself to the ancient game of Go, which W. was skilled in too. It’s a complex game that uses stones and requires military strategy and planning. John and W. had met at a game in Brooklyn and had been friends ever since.

After a long series of spontaneous toasts, followed by a lavish buffet, the speeches began. John had helped many students attend college on athletic scholarships, and twenty-five of the best and brightest were attending his party, bearing a plaque and a check in his name for his favorite charity. Then there were John’s kids and grandkids and his brothers and sisters, who attended with their spouses and children. Family members spoke of John lovingly. Then John’s sister and brother helped John, who was in a wheelchair, to his feet.

“I am happy to be standing!” he exclaimed with a smile. “Thank you all for coming. This is probably the last time I will see you all together in one room, and I want you to know that you have all meant so much to me. I have made peace with the upcoming event, and aside from a degree of physical pain, I have no suffering. In fact, the imminence of death sweetens my memories,” he paused, and looked at his wife, “in the same way, you, dear Maureen, have provided the sunshine in my life.”

Maureen sat in a wheelchair too. She wiped away a tear.

“My children, all of you here are the elements that I value in my life,” John continued. “I was supposed to be dead already, but I am somehow here with all of you, and I now feel that my life is complete. I believe that how you die is the result of the way you live. I am looking forward to a happy death. “

He looked around at the rows of somber faces and said gaily, “Now enough of this morbidity. Let’s dance and rejoice in this moment!”

Applause rang out, and then we danced.

Later, I thought about what John had said: “How you die is the result of the way you live.” What did that mean?

During a quiet moment, I approached John and asked him. He chuckled and said that organizing a death was not like ordering in Chinese food; that cancer certainly wasn’t what he would have picked to end his life. But he had controlled how he’d pursued his cancer treatment, and now, because he had the resources, he could afford to die in his own bed. “It will be a good death because I am helping those who will miss me mourn now before I am gone.”

“So you’re not afraid of death?”

“No, I am relaxed and curious. My concern is more about the pain I have experienced getting worse, though of course I know there are ways to minimize the pain.”

John looked at me and said, “I have realized that it is far more satisfying to live as if you could die any minute. I recommend it. There are many things I missed. Make a list and do as many as you can.”

I was very moved by this and made a list of things I had procrastinated about. At the top: Visiting New Orleans.

Two weeks later, John died. An hour later, I booked myself on a flight to New Orleans, where I will dance a tango in his honor. As a writer, I will use a version of this true-life experience to get the new story I’m working on moving if it begins to stall.

What I learned from John’s approach to life was, simply, “Don’t wait.” I hope you will take a leaf from John’s story and take that trip, write that book, say “yes” to things you always wanted to do but didn’t.

Don’t wait. We don’t know what the future holds.

Here’s to your successful and happy writing,