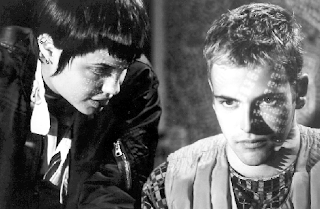 I am frequently asked by students, “How do I get an original story idea?” I confess that my first reaction is to raise an eyebrow and gently point out that there will be no original stories until aliens walk the planet or the Democrats get back into office. Instead we are left with the concept that originality lies in putting old wine into a new bottle, taking our human experience and presenting it in new ways. Wine from New Zealand is just the same as wine from California, but seems more exotic because it’s a new place for wine to come from.

So, where do you find new places for your stories to come from? I have found that real life is often a great source. As they say, art imitates life.

I recently read an article in the The Week, a great magazine that does a weekly recap of the best articles from the preceding week’s newspaper and magazines. The “Last Word” section is my favorite as it always highlights something really new. The title of the most recent article was “Meet The Hackers,” and as I read it I found a number of fresh ideas for a screenplay:

– The article is set at a computer hacker’s convention.

– There is a journalist who goes to cover it and gets a hacker to show him how it’s done. They hack into a university and the journalist witnesses a potential felony.

– The hero of the convention is a professional hacker – yes there are even heroes and villains in this world, the “black,” white’ and “gray” hats – hackers who use their skills for good, evil and business.

– The basic action in this world is that computer to hackers find vulnerability in a program on the internet and type up a set of instructions as to how to hack into and change the programs. They then post it on a special site so that other hackers can use it. This is called an ‘Exploit.”

-The good guys monitor the bad guys to protect the Internet from the evil hackers stealing our credit cards, changing election votes, the ingredients for medicines, etc.

For fun, I then used the elements from the article to create a one paragraph pitch for a new film called Exploit which is “War Games Meets Hitchcock.”

When a journalist covers a hacker’s convention, he witnesses a hacker committing an Internet crime. Then, a real person gets killed. Our journalist finds evidence of the crime on the computer in his room and the cops pounding on his door! He is forced to go underground and hide out in the world of hackers until he can prove his innocence. There he meets a female hacker, not unlike Trinity in The Matrix, who helps him.

You get the idea. Now as an exercise, find a current real life situation in the media and turn it into the set-up for a new film. It can be a comedy, or a thriller. The possibilities our endless and don’t settle for less that something that feels completely “new.”