What a great snowstorm!!! I love the snow and earlier today was playing hooky from writing and having a coffee outside. When I looked down, I saw this sign and took a photo.   The sign reminded me of what I’m here to do,  so I went home and went back to work.  The message I got was clear: Writing is a 24/7 job, and even though the holidays are coming, honor your inner writer who may enjoy writing as much as “civilians” enjoy hanging out! 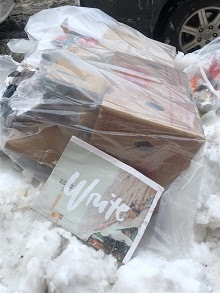 This week, I worked on helping a student adapt their feature script into an hour TV pilot. Of course, once you’re busy, you get busier, and two other writers converting screenplays into TV series approached me.  We reviewed the differences between screenplays and teleplays, and I thought some of the main points would be of interest.

Here are some adaptation tips:

1. You must “un-resolve” your story.
In a movie, the main conflict is resolved, while in a TV series, this core conflict must drive the series. For example, in the great TV show, Everyone Loves Raymond, the endless conflict is that he can’t choose between his parents and his wife and kids. In every episode, each part of his life vies with the other, and he can never win. In a feature script, this conflict would be resolved at the end.

2. A well-structured screenplay lends itself to a traditional TV season story “arc.”
You can break your screenplay into “episodes” and then expand into a full season of a series because a portion of the season story arc is told in each hour or half-hour TV episode. Further, you can adapt your current  ending  into  a “season finale,” which wraps up any loose ends and often suggests what the next season will be about.

3. Serial Structure is easiest.
When adapting a screenplay into a series use the serial structure because each chunk of the plot can neatly fit into a half-hour or one hour episode. Since my writing method, The HorowitzSystem®, divides a story into four-act sections, and twelve sequences, you can create a 13-part serial series with ease!

I’ll be exploring adapting screenplays for TV  in more depth in upcoming newsletters.