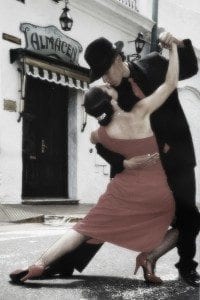 When my friend e-mailed me this morning and told me that his mother had died, I could feel his grief through his terse words, and I immediately wrote back:

“Mine died in January five years ago, and the holidays are tough. What helped me was to realize that she would always live on in my memories, and that no one can take those away from you. Celebration is a sure cure for grief.”

My friend wrote back, “What do you suggest?”

Hmm, I thought. Good question. So I picked up the phone and called to tell him the story of my own mother’s death and how I dealt with it. It went like this…

When my mother was at her most ill, she couldn’t speak, so we would hold hands, her in bed and me in a nearby chair. Sometimes we would watch TV and movies, but she loved tango music, so I would play her my playlists and we would listen for hours.

When she died, just after New Year’s, we were listening to Volver al Sud, by Gotan Project. I was holding her hand. The lyrics were perfect, about leaving for the “South,” leaving a lover to return “home.” As the life left her, my heart constricted as if an unseen boulder were crushing it.

I realized at that moment that I had two choices: I could grieve endlessly or I could celebrate her life and how we had become such close friends at the end. I knew she always loved a party, so I thought to myself, How can I best honor her?

At the time, I was studying dance at Fred Astaire Dance Studios on West 72nd Street, in New York. Though I began dancing and competing in ballroom and Latin, I had gravitated to the Argentine tango over the preceding year and fallen in love with it. My teacher, Tim, a willowy blond Bolshoi Ballet transplant, also loved tango, and he suggested that I perform a dance in my mother’s honor, set either to that music or some other favorite of hers. View the video here.

It was good advice. After all, dancing had kept me sane during the two-year process of my mother’s failing. So I decided that I would perform a tango to my mother’s favorite song at the monthly party held at the dance studio. It would require a rigorous rehearsal schedule, but that would keep me focused. At that time, I had a wonderful intern, a Turkish filmmaker named Nehir, who offered to shoot it, but in a way that would make it more artistic than a standard dance video.

Tim, Nehir, and I worked with Val, a partner in the studio, who created a wonderful choreography that was part scripted and part improvisation. One of the great things about tango is that it is improvisational, and we wanted to keep that feeling.

After many rehearsals, we were ready, and I prepared a brief speech for the occasion. About 75 people attend these parties, and more than one student performs, but on this night it would be only me.

When the time came, I actually felt very calm. I walked to the mike and spoke easily about my mother’s love of tango and how pleased she would be about all of this. Somehow I could feel her presence as the music began.

Tim and I danced our hearts out and received enthusiastic applause. Nehir cut the footage into a beautiful film, and when we put it up on YouTube, I felt a powerful sense of peace and was finally able to move on.

It’s not that I don’t often think of my mother. I do. But it is without sadness. Somehow the dance released me from the societal pressure to suffer. Instead, I choose to remember the good times she and I shared.

“What did your mother love to do?” I asked my friend. “What did the two of you do together?”

“How can you celebrate that?” I asked.

He paused a moment, then said, “I’ll have a memorial dinner and cook all the things we cooked together. You’re coming right?”

And so, I had the pleasure of attending a celebration dinner in Washington, D.C., in honor of my friend’s mother. There were 30 people, and we all told happy stories about this wonderful woman.

Afterwards, my friend expressed the same feeling of calm that I’d felt after the dance. He, too, seemed suddenly able to move on without overwhelming sadness or suffering.

To recap, make a list of the happy times you spent with a lost loved one, then find a way to celebrate him or her by honoring what that person enjoyed most. If a whole celebration is too much for you, just read over the list. I keep one of beautiful times in my life, and when I feel blue, I read it over. It always does the trick.