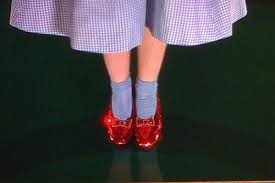 For the last few years I haven’t had time to arrange a Halloween costume, but this Halloween, despite work piled up on both sides of my desk, I walked into Ricky’s at 8:00 P.M. on All Hollow’s Eve and asked, “What do you have in a small?” The nice girl dressed as a biker chick with fangs and a whip went off and returned with a Dorothy from The Wizard of Oz costume, replete with headdress and a cute Toto in a basket. By an odd coincidence, the night before I had dreamed that I was Dorothy, so I was particularly pleased. There was also a Glinda the Good Witch costume in extra small, which I was glad didn’t fit. To me, this was a sign that I was finally willing to be the main character in “the movie of my life” instead of playing a supporting role, which is how I have felt for way too long. I also found the “too smallness” of the Glinda costume to be a comforting and confirming metaphor.

The last time I’d wore any sort of costume was several years ago. It was a Marilyn Monroe outfit complete with a blond wig, and I’d perfected her breathy voice. But this year I felt Dorothy was an upgrade because she finds home in the end and doesn’t have to die a miserable, untimely death. This represented to me an improvement in my self-image. Somehow the part of me that strived for stardom and sensuality was now too big to settle for a supporting role such as Glinda and was finding fulfillment only in the guise of a main character like Dorothy, finally ready to travel the Yellow Brick Road to a new, wonderful place.

This real-life assessment of my various costumes is actually taken from one of the exercises I use when helping writers get to know their characters fast. Here it is:

First, set a timer for 10 minutes.

Now, without stopping, write about what Halloween costume your main character would wear in the beginning of your story and where they would wear it. Then imagine whether or not they would wear a different costume at the end, and would they go to the same place? If you feel your character would never wear a costume, write about that and why. Finally, explain the symbolic meaning of the costume choices as I did earlier by analyzing how I began as poor suffering Marilyn Monroe and ended up as triumphant Dorothy Gale. For example, if you were writing Cinderella, you might explain how the fairy tale’s main character starts off in rags and ends up as a princess, like Julia Roberts in her breakthrough film, Pretty Woman.

I believe that everything we do, consciously and unconsciously, is an expression of our inner palette. Whatever the emotional “colors” that shape our perceptions of that movable feast of reality, they are best understood not from the internal therapeutic process, but rather by applying Stanislavski’s dictum “Action is Character.” The costume we choose on Halloween is one such action. Because of the dramatic nature of Halloween, it gives us a clear opportunity to explore our fictional characters and ourselves.

To recap: The “Halloween Costume and Party” exercise can give you insights into both your own life and that of your fictional characters.