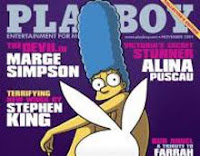 I just read that Marge Simpson is this month’s Playboy cover model. This raised many questions for me but also offered up an interesting script tip.

Marge Simpson doesn’t seem like a typical cover girl, what with being a middle aged (?) mother of three but who’s to say there isn’t a certain section of the Playboy-buying market that wouldn’t want to see Marge strip down.

As an exercise:
Think of your own main character. I’m sure you’ve imagined which actor would be perfect for the part. But instead of a real person, I want you to take a minute to think of which famous cartoon character would be ideal to play them. Is your character like Johnny Quest or more like Scooby-Doo? Have they had power thrust upon them like Spider-Man or do they “exit stage left, even” like Snagglepuss?

After you’ve picked your cartoon character, think about what that character is known for. Are there any qualities/quirks that you can borrow for your script?