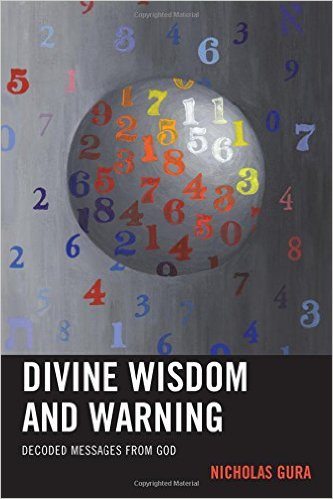 On the anniversary of 9/11, and with the Jewish High Holidays approaching, I interviewed a former student, Nick Gura, who has written a fascinating new book, Divine Wisdom and Warning: Decoded Messages from God. Nick is an expert in Gematria, the ancient system of assigning numbers to Hebrew words and phrases to uncover hidden meanings. For years, I’ve been intrigued by the way numbers and words relate to each other, and who isn’t fascinated by the idea of an ancient code that can help understand the past and forecast the future? I spoke with Nick about his book and his new, breakthrough approach to Gematria.

How did you get the idea for the book?

I was first introduced to Gematria when I entered the Ramaz Yeshiva in the third grade, but for years I set it aside. As an adult, I worked closely with numbers, but mostly as a stock-options trader on the floor of the American Stock Exchange. It was not until the events of 9/11 that my interest became rekindled. I began to wonder if the numbers 9 and 11 had any special meaning or were just random.

What did you find out?

It was stunning. I discovered that the numbers 9 and 11 were associated with other tragic events in history. For instance, on the 9th day of the 11th month of the Jewish calendar, in 586 B.C.E., the Holy Temple in Jerusalem was destroyed. And on the 9th day of the 11th month of our modern calendar—November 9, 1938—the Nazis burned thousands of Jewish stores, hundreds of synagogues, and sent over 20,000 Jews to concentration camps in what has come to be known as Kristallnacht, “the Night of Broken Glass.” This discovery encouraged me to delve further into Gematria, and eventually I devised a new way of using this ancient technique, which revealed hidden messages within both biblical and Modern Hebrew, possibly of divine origin.

How is your work different from traditional Gematria?

Second, I’ve developed a way to use the numerical values to create entirely new words and phrases, all with profound meaning. For example, in traditional Gematria the numerical value of Shalom, the Hebrew word for “peace,” is 376. My work goes one step further: I use 376 to generate the three specific and unique letters that correspond exactly to 300; to 70; and to 6. These three new letters can be used to create several new words, such as “make” (Asu in Hebrew). This I interpret as the divine directive “to make peace.” And if we rearrange the letters yet again, they spell “You shall cry out” (Shiva), which I interpret as a divine warning for what will happen if we fail to make peace. In the end, I discovered that every Hebrew word or phrase with a numerical value of 376 refers to the theme of peace, each one indicating either the wisdom of making peace or the dire consequences for not.

What kind of research did you do?

I spent the last seven years converting about 1 percent of the Bible into numbers. This has consistently revealed thousands of beautiful and metaphoric messages. These messages are listed in my book and appear to answer timeless questions and mysteries such as: Who really wrote the Bible? Was Jesus actually a messenger from God? And can science and religion be reconciled?

Can the correct interpretation of the numbers be used to reveal future events?

There are multiple biblical phrases with numerical values of 911 that seem to have foretold 9/11. These include: “But for this day I shall punish,” from Psalm 73:14; ‘’And He [God] shall not allow our feet to falter,” from Psalm 66:9; and “He [God] shall save them by overturning the wicked,” from Proverbs 12:7. But could these messages have been used to foresee and stop 9/11? I doubt it. The point is: What message do we take away from it? My work suggests that at least one purpose of 9/11 was to wake us up. For example, in the Book of Proverbs 9:10 it states: “The beginning of wisdom,” a phrase with a numerical value of 911.

What was your most surprising finding?

That the techniques I developed worked equally well with biblical text and Modern Hebrew terms, such as “quantum,” “karma,” and “website.” In addition, my work provides new insights into secular topics, including the environment, the treatment of women, and the reconciliation of science and religion.

What do you think of the many claims by stockbrokers that they can divine the market by using the Bible?

I don’t believe their claims.

Very challenging. I’m much more comfortable with numbers and puzzles than with writing. Therefore, I worked closely with a wonderful editor and copy editor who helped me. My wife also read through the manuscript and made countless valuable suggestions.

What was your writing schedule?

The last eight months I wrote morning, afternoon, and night. Over the last three years of working on the book, I lost over ten pounds. Maybe writing is a new form of exercise?

Can you summarize your book in one paragraph?

Our relationship to God is measured by how we treat each other. My work shows that we have the free will to pursue either the path of making peace or the path of promoting hate, and that there are consequences to each path: blessings, if we choose to make peace, and shame and humiliation, if we promote hate.

Thanks so much for your time, Nick.