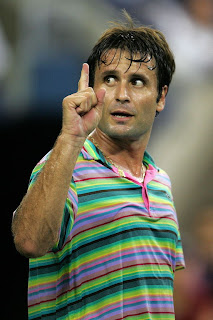 It’s strange being over here while an event like the U.S. Open is going on in NYC. I have managed to follow many of the event’s story lines though. Today I read a remarkable story about the retirement of France’s Fabrice Santoro.

Despite only making it to one quarterfinal in his 69 Grand Slams (a record), Santoro managed to beat 17 players who were once ranked No. 1, including Pete Sampras, Andre Agassi, Ivan Lendl and Roger Federer.

It made me wonder about our own industry. How do we measure success?

Is it how many awards we win? There certainly are a number of award shows these days.

Is it how much money our work makes? I’ve seen movies generate $100 million and be considered flops.

Or is it how many mentions we get in the dozens (hundreds?) of magazines dedicated to celebrity life?

Rather than an exercise this time, I have a suggestion for you. Take a moment right now and think about someone whose work you respect. Even if they haven’t won a lot of awards, or made a lot of money, or cracked the A-list take a moment to send an email about them to a friend, or tweet about them, or comment about them here, at the hopes that someone who “only” does quality work gets some recognition they so richly deserve.

And, when you’ve done that, take a moment to thank Fabrice Santoro for reminding us.