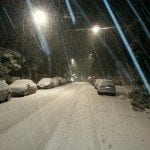 Recently, New York City experienced a blizzard that threatened to be the worst in many years. Thankfully, the storm disappointed and things turned out just fine. It also provided me with an opportunity to improve my latest story.

What interested me was how the media acted as if the apocalypse was upon us. Also noteworthy was how the threat of the impending storm evoked such different reactions from my students. I found myself wondering what my character would do in a similar situation.

My newest story concerns a woman who has recently buried her mother. She returns to New York from a warm sunny place during a blizzard. The shock of the heavy snowfall and extreme cold give her a sense of peace. On the way back from the airport, my character confides in the cab driver that her feelings match the weather.

This description was particularly important as part of the art of good writing is the precise use of metaphor and simile. Equally important is the necessity of a strong conflict. I saw that I could both create conflict and reveal character in the scene by simply having the driver respond to the character with the opposite opinion – that the snow was creating a problem for him since it affected his driving. In addition, she accepted the media assessment of the blizzard, while he pooh-poohed what he considered a ridiculous over reaction intended to generate more advertising dollars.

Once I started writing the scene, these seemingly minor conflicts added to the momentum necessary for the characters to really come to life. I was very pleased with the first part of the scene, but found myself stuck after the characters’ initial exchange. I was stuck because my goal in this scene was for the driver to reveal a little more of the plot and not just his own character.

The other interesting phenomenon about this blizzard was that each of my students who responded to the threat of the storm related back to their first experience with snow. Each of their stories offered me insights into their various personality types. This allowed me to contrast my students’ memories with those of my character.  This enabled me to understand some of the ways people cope with this particular kind of stress. Knowing how your characters deal with stress is another critical part of the story development process.

The insight that I gained was so helpful to me in moving my story forward that I decided to apply this situation to one of the writing techniques that I use with my students.

Here’s the exercise:
Step 1:  Identify your hero or heroine’s opinion of snow.
Step 2:  Set a timer for 10 minutes.
Step 3:  Writing in first person tense, as your character, write about their opinion about snow.
Step 4:  Again, writing for 10 minutes in first person as your main character, describe his or her first experience of snow.
Step 5:  Repeat the entire exercise for your villain, obstacle or love interest.
Step 6:  Write a 1-2 page scene using what you have learned.

To recap: when developing a new story, the key for any writer is to learn how your characters feel and behave. Giving them the challenge of coping with a snowstorm is a fast and fun way to understand them with ease.