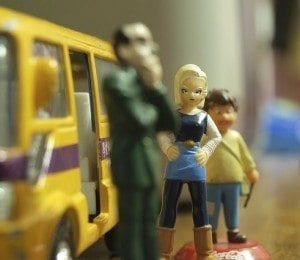 Recently, I was struggling with some character reactions for a scene in my new book. In the scene, my heroine meets not one but two of her bad boyfriend’s girlfriends, one former, one current. How should I have my heroine react? How should the two girlfriends react? I was on my way home and feeling a bit blue about my lack of progress, so I offered up a small prayer for inspiration as I got on the crosstown bus.

Sitting down, I noticed a lean blonde in white jeans and flowing silk blouse catty-corner to me in the front row. My seat was facing forward, and as I stood up to get off at my stop, she also stood up and we narrowly missed colliding. Rather than offering a friendly smile, however, she shot me an evil look. I ignored it and shrugged it off to what had been a contention-filled day. An hour earlier, I’d been waiting for a cab on Central Park West when a short Asian woman with a pair of tennis racquets cut in front of me and put her hand out as well. “Hey, I was here first,” I said. She gave me the same death glare, to which I politely responded, “Well, I’m sure that now two cabs will come.”

And they did. Of course, I took the first one.

But now, out of nowhere, this gal on the bus was giving me another lethal stare. Two death stares in an hour? It seemed like more than coincidence. Perhaps they had been divinely sent to help me write my heroine’s reactions in my new book. In any case, death stares were a good start. Hooray!

But then I got way more than I bargained for.

As we headed for the exit, a pretty black woman with creamy skin and short hair and wearing a pale-blue summer dress saw the look the blonde had given me and gave her a good solid kick in the shin. The blonde spun around: “Why did you do that, bitch?”

I got off, as did they. And as I started walking away, I saw the blonde chase after the black woman, who shouted, “Because you’re the bitch, bitch!”

Suddenly, the blonde leapt forward, slapped the black woman, spit on her, and even threw a punch, which the black lady parried neatly while grabbing the blonde woman’s purse and throwing it under the bus. Now the blonde went insane and attacked again, nails bared, spitting and kicking. The black woman shoved the blonde hard and ripped off her printed silk top, leaving her barely covered in a white camisole.

The blonde backed off, shaking her head, and pitifully looked around for her bag. At that moment, a large man stepped between them, and the black woman took the lull as her cue to leave.

Later, when I told my assistant about it, he shrugged and said, “Everyone’s getting crazy now.” Probably true, and a solid postmortem on that true-life experience. But as to the scene in my new story, well, just wait ’til you read it.