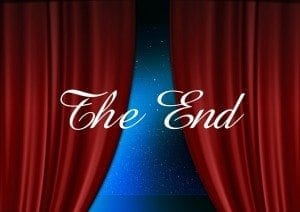 This past week, the question all of my students seem to be asking is: What is the best ending for my story? Usually this means they can’t decide whether their hero should live or die. But what I find most fascinating about this question is the underlying emotions that are being explored: What version of an imaginary reality are we willing to accept? What do we, as an audience or a writer, want or need to experience?

The world has grown so fragmented, so busy and pressured, that we look to entertainment to help us understand our own lives. Psychologists have observed that once our basic survival needs are met, our next priority is to express our inner self and make sense of our existence. This means that the stories we watch or read must take us on a journey with a satisfying conclusion. They do not have to end happily, but they do need to provide us with some basic human truth or insight.

The nihilist ending, in which the protagonist dies or fails, is often considered to have more integrity than a so-called “Hollywood ending.” The world is a dark place, goes the argument, and true art should reflect that. I disagree. I believe that hope is the most potent emotion that a story can elicit. Hope is what makes us go on in the face of despair, and there is so much horror in today’s world that most of us feel the need for positive stories more than ever—stories where bad guys are punished, virtue is rewarded, and lovers are united. In a crime story, we need to see the bad guys caught and punished. In horror stories, we can’t wait to see the monster unmasked, or slain, or at least held at bay until the sequel comes out. To me, these kinds of stories are every bit as legitimate and important as the nihilist ones.

This is not to say that the Hollywood ending, in which everyone lives happily ever after, is the perfect model. Unhappy endings can make us face hard truths about ourselves and our world in ways that Hollywood endings cannot. Unhappy endings create a sense of balance and believability, and even though they might not give us everything on our wish list, the good ones do not drive us to despair, either. Even though the lovers don’t remain together in Romeo and Juliet or Casablanca, the stories infuse us with the excitement a love affair brings, however short-lived, while at the same time giving us important messages, about overcoming tribalism and prejudice, and of the value of fighting for something larger than yourself.

One of the best ways I know to determine the proper ending of your story is to write two versions, one exaggeratedly upbeat and the other exaggeratedly downbeat. For example, I have one student whom I’ve worked with on several projects. Without fail, in the first version of his stories—which are usually thrillers—this student has his hero fail and be killed. He is convinced that this is the “realistic” ending. I then—also without fail—remind him of true stories of people who have succeeded. In the end, we usually agree that his hero should die, but only after he or she first experiences a great triumph. This student has been very successful since we’ve been working together, so the system seems to work.

It’s an exercise worth trying:

Step 2: Write the basic plot for your story as fast as you can. Don’t worry about plot holes—just keep asking yourself  “What happens next?” until you get to the end. Choose the saddest, worst, and most downbeat and hopeless ending you can think of. (Remember, it’s only an exercise.)

Step 3: If you’re on a roll and need more time, simply reset the timer for another half hour. If not, leave the story alone and take a break.

Step 4: Reread what you wrote.

Step 5: Briefly write the opposite ending, however corny or preposterous it may seem.

Step 6: Give yourself an hour or so to process your two endings, and now write an entirely new ending. You will find this “third right answer” will be close to perfect.

To recap, endings are critical, but finding the right balance can be challenging. Sometimes the answer is to write both the happiest and the saddest versions, the most hopeful and the most depressing. The answer probably lies somewhere in the middle.