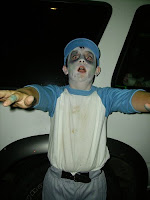 What do the World Series and Halloween have in common? Aside from the fact that wearing a costume or a uniform is part of the deal, they are both defining events and very useful as potential “ticking clocks” in your screenplay.

In my Finish Your Script class tonight, five of my incredibly talented and prolific students had hit the mid-script wall and were struggling with what should happen next.

The answer in all five cases was to take the third act climax, go back to the first act, and to lay in hints that let the audience know where the film is headed, almost from page 1. By highlighting the amount of time that passes between the moment the event is introduced in the first act until the event occurs in Act III is a great way to add suspense, an essential ingredient in almost every film.

For example, in the film, Election, we know immediately that the big event happening in the school is the election. The action of the film is driven by the fervent desire of a teacher, Jim McAllister, not wanting an ambitious student, Tracy Flick, to win because she has wronged his friend. The lengths to which Jim is willing to go to stop her creates an organic chain of events that can create maximum suspense, and lead up to an original and unexpected crisis.

In my students case, one film was set in high school and while the election of the Homecoming King was the deadline driving the action, it hadn’t been set up clearly enough in Act I. Revising Act 1 to accentuate and underline the Act III final battlefield was the solution to getting Act II to roll forward and answer the dreaded “what happens next?” question.

The point I am making is that you could replace the election with the last game in the World Series or a Halloween party and achieve a similar result. Try it and let me know how it turns out.

Look for a more in-depth analysis of this technique in my forthcoming Script Tip for www.movieoutline.com.