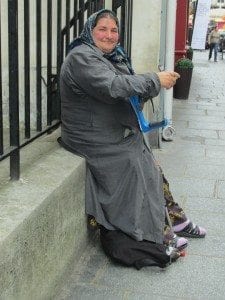 My experience with money is that the more you give, the more you get.
A small way I walk this walk is that I usually give money to homeless people because I can’t bear the idea of a fellow human being hungry.When I was in Paris recently, there was an old lady begging in front of a synagogue in the Marais, the “Jewish” part of Paris. I gave her some euros, and my tour guide said, “I never give any of them money because then I feel I would have to give everyone money.”

I said, “No, look at it this way: In the Talmud it says that ‘If you save the one, you save the many.'” He nodded, smiled and the next time we saw a homeless person, my guide gave him a euro. “I feel…rich.” He looked surprised at his own reaction.

I laughed, “Now you’re getting it – the true definition of wealth is having enough to give.”

As we were walking, he got a call for another job that will pay better than he has ever been paid before!
So, to get more money fast, give a little away — feeling rich attracts money.

I love this quote from the Abraham-Hicks folks: