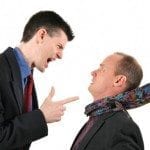 This week I have been teaching my students the importance of creating character-based, rather than plot-based, conflict. As we writers know, conflict is necessary for any story to work. Simple conflict, however, where the issues are only about plot, will create flat writing, lifeless characters, and a story that limps along. Whereas developing characters who have depth and multiple layers of inner conflict will create a richer and more interesting story every time.

How do we put these ideas into practice?

First, think of a setting where your characters can meet, such as a restaurant or coffee shop. Avoid adding an outward plot event, like a robbery or a car coming through the door, and instead look for small, character-oriented conflicts, such as differences in table manners, tipping, punctuality, or drinking habits. Just having your characters sit down and order may be enough to start a small war between them. For instance, a friend of mine keeps kosher and is upset if fellow Jews, however unobservant, order non-kosher items, such as bacon. Imagine the scene you could write about that!

Now consider what would happen if you worked strictly from the plot angle. If you were to add an external event, like a waiter providing poor service, then the characters might argue over whether or not he or she deserves a tip. One character refuses while the other is a “regular” and feels that everyone is entitled to an off night. Not much of a scene, right? But add the argument about ordering non-kosher food and you can create a real brawl—and that’s before your characters ever argue a word about whatever your plot requires!

An added bonus about developing your characters this way is that it will save you many hours of revision. Think of it as building a house: if you create a strong foundation, then the structure will be strong and stable. Without that good foundation, the house will be weak and at risk of collapse.

To recap: Developing characters with multiple layers of conflict will help you write a better, richer story from the start.