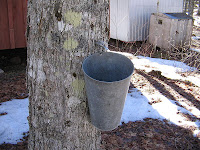 He was kidding, of course, but it caused me to think about the lack of subtlety in most scripts.

A few days ago I was reading the shooting script for The Shawshank Redemption (available in most bookstores). In his production notes, Frank Darabont described how difficult it was to “establish” an office as the busy newsroom of a newspaper. Finally, after many variations, he found that the easiest way was to have one of the characters simply answer the phone and say the name of the newspaper. It was a simple solution that avoided a lot of unnecessary dialogue and exposition but it took him a few attempts.

Now using that information let’s examine my question to Chris and try to determine how you could show that the Thanksgiving in your script was Canadian instead of American. Would you put a jug of maple syrup on the table? That’s one possible solution – though probably not historically accurate and, yes, before you send me your emails, I know Vermont has terrific maple syrup too.

Or would you just write the scene in French?

As an exercise:
Take any of your scenes that you feel might be too wordy. Is there an easier way to express what you mean? Do you actually have to show the exterior of the building or can you just have a passenger in a taxi direct the driver? Does your character really need to order a detailed meal, or could he just hand the waitress a laminated picture of what he wants? Does the tour guide really need to say ‘Here we are in Egypt’ or can you just show the Sphinx?

Don’t forget that the screenplay is never the final product, it is just a plan for the movie. The clearer your instructions, the better chance of a successful film.