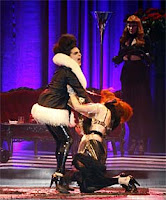 One of my dear friends had a break up with a boyfriend that turned violent. She was home with her new beau and her old boyfriend broke in waving a baseball bat! She grabbed a frying pan as her new guy defended her and very nearly ended up in jail.

These are people with graduate degrees from Ivy League schools. Oy!

As an exercise:
Who would your main character be in this scenario? Would they be the victim, the aggressor or the defender? How would this altercation end for them? What if this happened to your character in the past? Would they tell anyone? How would it shape their attitude toward life and love?