Summer is here, and I wanted to share the amazing roses that are growing in my little urban garden. 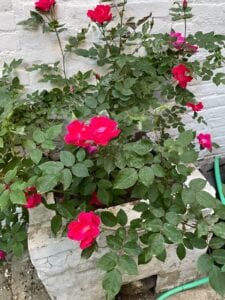 This coming week leads into the Memorial Day weekend. This holiday commemorates and celebrates the military personnel who’ve died while serving our country.

Although it is a long weekend, I think that as writers, we should take the opportunity to reflect on the nature of war and the lives every war costs. Should there be more war? Can war ever be good? Is there any justification for sending men and women into battle?

In the digital age, wars can now be fought on a virtual playing field, or if live, using drones and robots to save our fellow humans.

My idea of war is that you put the two leaders who are opposed into a boxing ring and let them slug it out. Imagine Netanyahu and the Hamas leader. No terrorism, just a good old-fashioned fistfight.

Remember that old chestnut, “What if they gave a war and nobody came?”  I think it’s a great idea for the future, but we must honor those who have already made the ultimate sacrifice.

As always, what’s happening in the world leads me to think about what kind of people our imaginary characters are and what they would do in the current circumstance. We must use every event to improve our understanding of our imaginary people. What kind of person becomes a soldier? Would the characters you’re writing about join up, protest, or ignore? How do they feel about war? Have they ever been in one or had a relative who has? War has been going on for a long time, so take a moment to consider what kind of character would be willing to risk his life or her life to save our country. Needing a paycheck is a valid reason for joining up, but there are other ways to make a living. 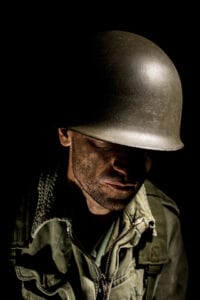 My stepfather, Alton Johnson lll,  served seven tours in Vietnam as a sergeant.  He had the gift of second sight because his great-grandmother was Cherokee. When he and his battalion would go out on maneuvers, although he was a sergeant, he always led in his bare feet! He could intuitively sense both the hidden enemy and the landmines that were plastered throughout the jungle floor. Al never lost a man. He was a patriot who ran away at fourteen to join the army during World War II. He was a diver in Iwo Jima, having successfully lied about his age. He was a career Marine and only quit when he met my mother and joined our family when my brother and I were young teenagers. He was the best step-father ever!  He guided me into becoming a strong, practical, successful woman and my brother into a powerful thinker and leader. So dear Al, whatever part of heaven you’re in, I send you my love and thank you for your service to our country.

I’m so excited to share Jokeonastick #73, marking our 300th clip! 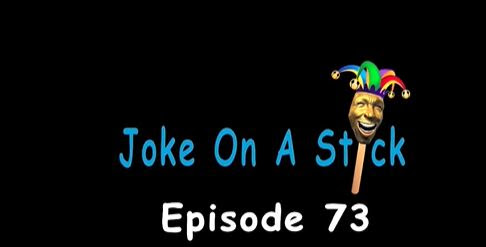