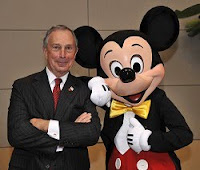 In today’s New York Times, it was announced that Mickey Mouse is being reinvented as a cunning trickster for a new video game.

It’s evidently a return to the Mickey of the 1928 cartoon, “Steamboat Willie.” In this cartoon, according to the article he “was the Bart Simpson of his time: an uninhibited rabble-rouser who got into fistfights, played tricks on his friends (pity Clarabelle Cow) and, later, was amorously aggressive with Minnie.”

It made me wonder about what, as a society, we have come to value. In New York, Michael Bloomberg (cleverly?) arranged matters so that he could have a third term. As I was voting, I heard a few people say, “It feels a little Mickey Mouse to me.”

On the one hand Bloomberg has been creative with the law, but on the other hand, he has had a financially successful and peaceful reign. What do you think and what would your main character think about all this?