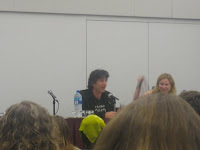 An update from The 67th World Science Fiction Convention in Montreal.

Thanks for mentioning the podcast on your blog. I thought I’d pass on some announcements made during today’s Neil Gaiman session:

– Stardust is being reworked as a musical for the stage.
– He is also working on an original musical about a French theatre. He says it’s an alternate history – “The way the story should have went…”
– Director Neil Jordan is turning The Graveyard Book into a film.

He also let it slip that his friend John Hodgman will appear on the British program QI.

During the Q&A period he was asked about whether he considers his audience when writing his books. He said writers should always write for “someone who’s kind of like you, but hasn’t read the book yet. It’s an idealized version of you.”