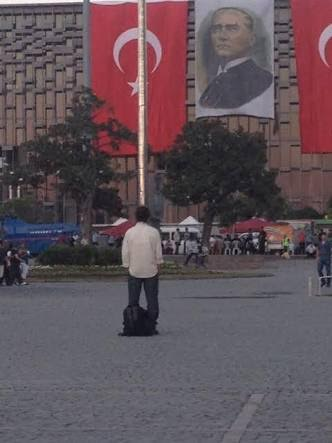 I was delighted to spend time with Aylin Dogen, a favorite former student of mine who’d stopped in New York on her way to a scholarly conference. The topic was performance art in relation to social media, and Aylin was giving a talk about the phenomenon of “the Standing Man,” a non-violent protestor in Turkey who, in 2013, staged a protest that went viral and caused thousands to follow suit.

For many years, Aylin has had a successful writing career in Turkey, and I was curious how this talented screenwriting major had now become an interpreter of politics and social media. While I could understand how a dramatic writer might expand her interest in storytelling for the screen to storytelling in the real world—in this case, the Standing Man’s vigil—I wanted to know the details of her personal evolution…

What is your writing background?

“I had my education in screenwriting in New York back in 2000, working with great professors such as Everett Aison (SVA), Tanya Hamilton (the New School), and of course you (NYU). After returning back to Turkey, I started working with Barış Pirhasan, who is one of the leading screenwriters there.”

What experience have you had professionally?

“I have been writing TV serials since 2002. I co-funded writing studios as well as writing groups with my colleagues and students and have co-written eight TV serials since then. The last project I worked on was Galip Derviş, an adaptation of the American serial Monk. In the meanwhile, I’ve worked as an instructor of screenwriting at Boğaziçi University, Istanbul Bilgi University, and Bahçeşehir University.”

What made you decide to get a more advanced degree?

“I decided to get my Ph.D. in cinema and media studies in order to educate myself both as a writer and a lecturer. In 2013, during the Occupy Gezi movement in Istanbul, I was overwhelmed with the idea of the aesthetics of politics. I started studying activist performance art in relation to social media and the role it takes in decision-making.”

What was your presentation about?

“In the speech I made at the ASAP/7 Conference http://www.clemson.edu/asap7/, I tried to challenge former theories in performance art that declared that performance’s strength lies in its liveliness. By 2005, with the emergence of social media, as a feature of the participatory culture, grassroots movements had the chance to take voice in decision-making. I tried to discuss that, with its poly-spatial (both online and corporeal) presence, the strength of a mobilizing performance artwork comes from its “spreadability.” The case study I shared in the conference was from my homeland, featuring Turkish performance artist Erdem Gündüz, who is now known as the Standing Man. He was the one to stand still against the violence and intolerant governmental politics that arose in the Occupy Gezi movement, in Istanbul, 2013. As soon as his performance spread and mobilized millions within the online agenda, hundreds of people took their place on the streets, re-enacting his performance around the globe.”

What is your next project?

“In 2014, I co-founded Lotus Film Istanbul, to produce independent films as well as alternative TV programs and digital projects. To make a shift in my writing journey, I designed a novel series, the first of which will be released in 2016. I hope to be back in the writing scene with these stories of mine that picture the fictional backstage or the parallel universe of world literature.“

After my discussion with Aylin, I found myself wondering what I would champion in the real world if I were to develop a more political and socially aware interest, and where I might be led. My own stories, and most recently my novel, The Book of Zev, address the issue of how to deal with violence in a non-violent way, though the broader themes are more about the effects of faith. So, my answer would be terrorism and the Middle East conflict.

Ask yourself the questions I asked Aylin. Then ask them for your characters and see what you come up with. You might be surprised by the answers.