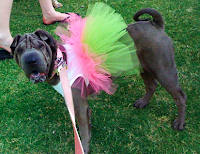 I was walking down 43rd Street earlier today and spotted an elegantly dressed woman walking her large black Doberman that was sporting a pink tutu. They trotted happily along, with her in haute couture and the dog in his Swan-Lake-inspired costume. I was too stunned to get my camera out in time, but you can see from the picture above, she’s not the only dog owner out there who thinks this is a good idea.

Another power woman rolled her eyes as she walked by and told me, “Ugh, and she said he was a male dog!”

I said, “I hope she doesn’t do that to her husband.”