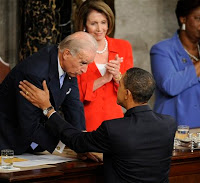 One of my private students was at work and a co-worker came in and said, “I am so steamed about the health thing getting passed.” My student observed that his co-worker was responding to politics as if they were sports and that each of the parties were a team. In this case, the Democrats had scored a touchdown against his co-worker’s team, the Republicans. I thought my student’s insight was brilliant.

Whatever you think about health care reform, consider that Obama for better or worse is actually getting something done and this is a significant political moment.

The aspect of our characters that is “political” is so often overlooked and can provide a clever way to convey a great deal of exposition. Consider the scene in When Harry met Sally, when Jess. Harry’s best friend, suggests that Harry’s date is a bit too young. Harry affirms that when he asked his date where she was when (John F.) Kennedy was shot, his date said, I didn’t know that Ted Kennedy had been shot,” or words to that effect. What is conveyed is Harry’s age, his political awareness, humor, and his relationship with Jess.

What political event has impacted your own character’s life?