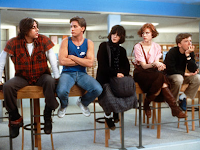 I’m watching The Breakfast Club and feeling the loss of John Hughes keenly. First Blake Synder and now this.

John Hughes made many amazing movies as well as this one, including Ferris Bueller’s Day Off, and Animal House. His films are masterpieces. They combine originality with classical structure and so embody the period they were shot in while also being timeless. John Hughes will live on in our hearts.

He contributed to the pantheon of teen movies, while reinventing the teen’s coming-of-age genre.

I am often asked how to structure an ensemble film, and The Breakfast Club is a perfect example of how to do this. A well-written ensemble script should focus on the main character who has the most to lose, in this case, Judd Nelson’s character John Bender, a.k.a The Criminal. The other characters’ arcs should parallel his emotional journey. In The Breakfast Club The Criminal is pitted against the principal, who is the villain, a character who doesn’t change.

John Hughes was a great filmmaker and this film really personifies the new adventure I teach in my newest book, The Four Magic Questions of Screenwriting.

The first Magic Question is: What is the main character’s dream? In the beginning of the film, each of the characters personifies a stereotype, and each character is desperately trying to maintain the persona they have chosen. Each character’s dream is to stay as they are.

The fourth Magic Question asks: What is the resolution of the main character’s dream, or what is the new dream? In Act III, the character either realizes his or her dream from Act I, forfeits the dream, or finds a new goal during Act II.

As the film progresses, their roles shift and change. By the end of the film, each character has realized that each has each other’s personas inside of themselves and they connect with the least likely classmate: The Athlete with The Basket Case and The Princess with The Criminal. The resolution of The Breakfast Club is that each character goes on a new adventure: They are willing to be who they are, and to go for what they want instead of maintaining the status quo.