Every Memorial Day, I think about my late step father, Al Johnson, who began his Military career by running away at fourteen to enlist. He successfully lied about his age and served in Iwo Jima. He served seven tours of duty in Viet Nam. He was a great man, and I think of him every day. I wanted to honor Veterans and also examine films about Memorial Day. 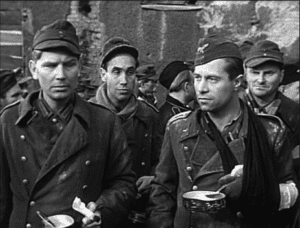 What I found was a wonderful war movie from 1951, Decision Before Dawn. The film was nominated for an Oscar, and is wonderful. The reason I mention it is because of what I found in the comments below. The film used soldiers in small roles and the first commentor’s father was in the film.
He was very proud, and the responses were amazing-other men talking about their fathers. I was very moved by it, and wanted to share. It was comforting to hear such love for their fathers being shared. I felt connected to a larger community! For more info about the film: https://en.wikipedia.org/wiki/Decision_Before_Dawn

I also love war movies, so here’s my list of 10 favorites for Memorial Day watching: