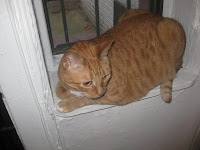 I am having the drapes in my apartment cleaned this week so my windows are currently bare. My cat, Big Red, was shocked to see there was a window sill (usually obscured by the curtains) and immediately claimed it as his new perch.

I’m in the middle of my new book about rewriting and I realized this simple action by Big Red was a terrific example of an efficient approach to rewriting.

Quite often, when writers come to work with me for the first time, they initially struggle with the rewriting process because of how they wrote their story in the first place. My motto is Don’t Get It Right — Get It Written because I believe a writer should lay out their story first, as quickly and roughly as possible, and then go back to rewrite only when they are done their initial first draft.

Many writers do not do that, instead trying to rewrite as they go. This leads to many problems when they try to rewrite their script and instead of just being able to remove a layer (like the drapes) to reveal something new and interesting, they find that they have to try and rebuild the entire wall.

As an exercise, set a timer for 15 minutes and write your story by hand. Don’t stop to consider what you are writing (or what you are missing) and just hurry to get as much of your story down as possible. Then when time expires, take a 5 minute break before you go back and read what you have written. Are you missing anything? What seems unnecessary to the plot? Did you include something that you hadn’t thought of previously? Are you surprised how fast you were able to tell your story?

By using this approach to writing (and rewriting) you will be amazed at how much faster your process will be.