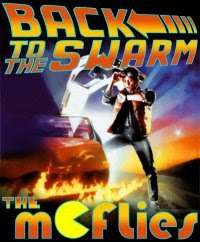 Now that the Stanley Cup has been settled, my Canadian assistant has finally started talking about something other than hockey.

Today, he told me about a Toronto-based band called The McFlies, which “un-covers” the music from the 1980s. They are obviously influenced by the film Back to the Future – their name comes from Michael J. Fox’s character and the Delorean is a big part of their publicity material – and my assistant tells me they’re quite good.

This made me think about what it takes to shepherd a film from script to production. Recently, I executive produced a feature film called Caleb’s Door. It was a long, sometimes difficult process but not the impossible task that filmmaking is often made out to be. During the production, I was grateful for all of the help I received from my friends and family, and the process taught me that too often we underestimate the resources we have available to us.

Maybe your cousin is a wardrobe assistant, your sister does make-up, your friend owns a lighting kit, or you just have a great location to shoot. Or perhaps, as in my assistant’s case, you know a group of talented musicians who could provide music for your film.

When you feel overwhelmed by the prospect of making a film, never forget about what (and who) you already have access to. Film is a collaborative medium.

As an exercise:
Make a list of the people and resources you have available to you if you were going to shoot a film today. You might be surprised how prepared you are.