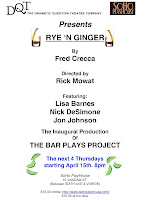 My good friend Rick Mowat’s play Rye & Ginger has been extended again so, if you still haven’t seen now’s your chance.

BY POPULAR DEMAND RYE ‘N GINGER HAS BEEN EXTENDED! AGAIN!!

“A timeless piece reminiscent of Tennessee Williams that deals with the human condition. Though very tender and humane, it’s not the least bit sentimental. At the same time, it has a tremendous sense of humor. Superbly acted and directed, this piece deserves a long life Off-Broadway, and/or On Broadway. See it!”
– Stass Klassen, starring in “The Nose” at Lincoln Center

So folks, now you can see this superb little gem of a piece at the renowned Soho Playhouse in their Huron Club – aka “The Bar.” Perfect spot for it and if you come in the first two weeks just say the words “Rick sent me” and for you, only 5 dollar! Otherwise it’s $15 at the door. Now honestly, where you gonna score that kind of deal!