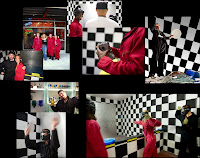 Today I was flipping through some of the magazines I brought with me on the trip when I stumbled upon an article in Entrepreneur about Sarah’s Smash Shack. Located in a business building in San Diego, CA, it features “two rooms where plates and glasses and bottled-up emotions get broken. Customers are encouraged to bring their own music and really lose themselves in the moment. The operation hosts corporate parties and gets clientele in and out for about $20.”

I was intrigued by the idea, not because I’m in the mood to destroy something, but rather because I’m fascinated by what would drive people to it.

The founder, former veterinarian Sarah Lavely, apparently came up with the idea during her messy divorce two years ago.

As an exercise, think about what has (or would) happen in your own story to drive your character to a place like Sarah’s Smash Shack. And, when they get there, what would they break?

Even if you’re writing about a relatively mild-mannered character, it can be valuable to consider what makes them angry.