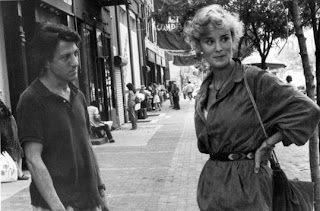 The following script tip was originally published at movieoutline.com

Many of my students say that the hardest part of writing a screenplay is getting the characters out of Act 1 and into Act II. In my writing system, the question the writer must answer is, “Does the character cross a threshold and enter a new world?” We can define ‘new world’ as the next place your character has to go. In Star Wars, it’s going to a new planet; in The Wizard of Oz it’s getting to the dream world of Oz, and in Tootsie, Michael gets the job as an actress.

The first thing you need to do to successfully transition into Act II is a strong first act finish that forces the character into a crisis. For example, in The Wizard of Oz, Dorothy has run away with Toto to prevent his being killed. When she meets Professor Marvel, he convinces her to go home because Auntie Em will die without her. Here is her dilemma: If she goes away with Toto, Auntie Em dies. If she returns to Auntie Em, Toto dies. Try to find a way end your first act with these kinds of stakes.

Main characters are often passive at the start of the film, and we need to get them to become active and take control of their destinies. Many times we don’t pick plot events that are strong enough and the character remains passive throughout Act 2. Remember that our fictional characters, like real human beings often need a strong push before they can let go of where they are and move forward.

So to push them hard enough, the next element needed to move powerfully from Act I to Act II is an event, such as a tornado, that literally forces our characters to enter a new situation and to act. The goal is not to just add some random plot twist, but rather to understand what the character’s fear is, and select an event that forces him or to face their worst fear.

The right choice of events also sends them on a new adventure. Otherwise, Dorothy would have just gone home. The tornado whisks Dorothy to Oz, which takes her far away from home which is her worst fear, and also sends her on a journey that helps her understand what “home” truly means.

This event does not have to be weather. In the original Star Wars, The Empire kills Luke’s family. The event was the murder of his aunt and uncle. In Tootsie, the event is the audition, which gets him the job as an actress.

By making sure your first act climax places your characters in a crisis situation where there is no compromise, and then finding a powerful event that leads your main character on a new adventure, you will dramatically improve the structure your screenplay, what ever stage it’s in.