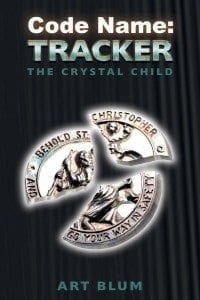 I am so proud of my student, Art Blum, whose novel, Code Name: Tracker: The Crystal Child, is now available on Amazon. It’s an amazing story and I am proud to have helped him complete the story.

A notorious terrorist is on the loose and planning a massive attack to kill a million people in two days. The C.I.A. is helpless. Their psychics aren’t up to the task. Their field agents aren’t even close. So, whom do they call? Ryan Gordon, a 28-year-old scam artist who bills himself as “the Psychic to the Stars.” One day he’s shaking down fading divas by contacting spirits of their long dead lovers; the next he’s strapped to a chair with wires stuck to his head and chest being interrogated by guys claiming to be C.I.A. and insisting he’s really Kenny Vickers, the greatest psychic ever known. What’s worse, the terrorist—“Axel”—also wants to procure Gordon to use him as his secret weapon. Is Gordon really just a scam artist? Or is he in fact the greatest psychic ever known? Our hero has just two days to come to terms with his true identity and, oh yeah, save the world.

Art first developed his story as a screenplay, and while it was very good, something was lacking. The structure was close to perfect, yet somehow the script wasn’t satisfying. As a novelist, I recognized that the problem was the inability of the screenplay form in general to fully explore characters’ inner thoughts. Screenplays are based on visual action, and the deep complexities of Ryan’s soul could only be adequately expressed by turning the work into a novel, a medium that begs for more introspection and intellectual subtlety. Art took my advice and switched forms, successfully turning his screenplay into a taut, character-rich thriller. Ironically, in the near future, when Tracker has the opportunity to be adapted back into a screenplay, it will reap the benefits of having already been expanded into a novel.

If you’re writing a screenplay, one way to capture the advantages of a novel is to write a short-story version of your script using the third person, past tense. On the other hand, if you’re writing a novel and want to capture the advantages of a screenplay, try creating an outline of your plot as if it were a fully developed novel. Screenplays are traditionally structured with three acts that clearly define a beginning, middle and end. In my writing system, this basic structure is further broken down into bite-size chunks so that your story is easy for you to understand and to communicate to others. This linear structure forces you to clarify the key points in your story and will keep you from getting lost.

It’s not always easy to know right off the bat whether your story should be a screenplay or a novel, or even a painting or a poem. But one sure way to improve your work is to use the best attributes of each medium to further the one you’re working in.

Keep your eyes peeled for the sequel to Tracker, due sometime next year.

Here’s to your successful writing.