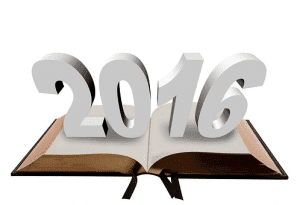 At the end of each year, it’s useful to take stock of what was accomplished in the preceding year, and what wasn’t. This is not the most fun task, so to spice it up, I imagine that I myself am a character, and that the preceding year was a movie, novel or a season of a TV show in which I starred. There are three steps to this exercise.

Step 1: While the structure of the traditional three-act structure doesn’t apply directly to our actual lives, the rhythm of beginning, middle and end does. Every day begins and ends, as do projects, semesters and vacations. I suggest that you take a few minutes and list the major events of the year using this idea. For example, I got a teaching assignment at The School of Visual Arts, I taught the classes, and then the semester ended and I turned in grades. I use a timer set for 3 minutes. This is long enough to brain storm, but short enough not to get distracted. Try it, and I think you’ll find it satisfying to see how much you really got done. Once you’ve brainstormed, look at your list and determine what you like most and what you liked least.

Step 2: In my writing system, we organize story into the Three Levels of Conflict. The levels are defined as: Inner Conflict, Outer Conflict and Societal Conflict. Inner Conflict is comprised of whatever is stopping my hero or heroine from achieving the goal. Outer Conflict is the plot, the events that drive the story, and Societal Conflict are the forces such as politics that cause the main character to struggle hard enough to give our story the necessary momentum it needs to reach a climax and complete it.

Set a timer for 3 minutes, and write about your internal conflicts. For example, when an editor worked on a manuscript I wrote and made it so much worse, I went into shock. My conflicts about being a writer have been tweaked, and the situation is unresolved. Reread what you wrote and consider what you might want to change in the future. For example, I will revisit the manuscript, and attempt to be objective, and use this botch as an opportunity to improve the story.

Set the timer again, and this time, write about the Outer Conflict, something that happened in your daily life that affected you. For example, one of my colleagues became ill, and I taught several of his classes, which caused a delay in a project being completed. Did I make the right choice? Reread what you have written, and consider as I did, whether you made the best choice. Ask yourself if you’d make the same choice if the situation reoccurred.

Finally, reset the timer and write about a societal conflict such as your choice for the American President, or a legal or criminal matter that affected you. I had to decide whether or not to take my landlord to task about a problem wall in my apartment. Why is this a Societal Conflict and not an outer one? Because the decision was made on the basis of my role in the situation, and that society, at least in New York City favors the landlord.

Step 3: Reread what you’ve written, and spend a minute or three writing about what you want to happen in the coming year. For example, I would like to teach more classes at SVA, I don’t want to substitute for a colleague, and I want my apartment wall to be fixed. I also want new opportunities and to get my novel into shape.

Put this list somewhere you’ll see it and review it daily. I update it regularly with new things I want, and find that most of what I’ve written happens.

To recap: taking a few minutes to review the year that has passed and making plans for the future can be done fast and efficiently employing some of the skills we use when writing screenplays and TV.