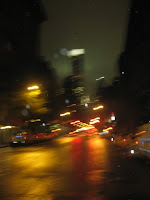 It was midnight and it was deserted so he stopped the cab and said angrily,” I asked you if it was Central Park West!”

“I’m sorry, my mother is about to undergo major surgery, and I’m a bit upset. sorry for not being clear. Please forgive me.”

He resumed driving, made a U-turn and we headed down Central Park West. “I forgive you already and It will be okay,” he said, ” I understand, you can’t replace a mother.”

“She had a heart attack. We were still in Africa then. My mother was 81. One day, she got up in the morning, took a shower, and then sat down in a chair, and didn’t get up. My wife found her and called me. she said, Your mother won’t talk to me, I can’t rouse her. I came, and there she was. I had never experienced something so shocking.”

Our eyes met in the rear-view mirror for a moment in shared recognition. There was a silence as we turned down 71st street, and there was a feeling that we had gone from cab driver and ditsy passenger to members of the same human family. I suddenly felt that I could cope with whatever was going to happen. That feeling of connection is something to be grateful for indeed.