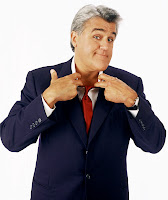 I have been following the announcements about The Jay Leno Show, NBC’s “new” talk show. Rather than focus on the fact that, if successful, it represents 5 less hours of scripted television each week, let’s consider his first guest: Jerry Seinfeld.

If you were hosting a new show, who would you pick to be your first guest? Now think about who the main character in your script would choose for their own show.

Taking the time to decide who your hero would want to talk to can reveal interesting details about their character.